An attempt to make sense of it all

My friend Chuck got a home New Year’s Eve.

I’ve known Chuck for most of my 3 years in Tacoma. I met him near People’s Park. He sat at the bus stop every morning as Yogi and I walked or ran by, drinking his 2 Milwaukee’s Best tall-boys and talking to passers-by. Chuck was hard to miss:  his dirty-white beard was at least a foot long, his white hair escaping from under the ever-present Seahawks cap (or beanie, when it was really cold).

For the better part of two years, the conversation was pretty much the same: Chuck would yell, “GOOD MORNING, GREG!!!” at least half a block before I reached his bench, followed by a more conversational, “Hello, Muttley” to Yogi as we approached. From there, we discussed the weather, Chuck’s health, and how he was faring in his efforts to find a home. He would occasionally let slip a detail or two about his family, his upbringing, or his past, but mostly we talked about his days-what had happened yesterday, what he planned to do today, and maybe what was in store for tomorrow.

Chuck didn’t think too far beyond tomorrow. He was convinced he didn’t have much time left. Not too long after I met him, he informed me he was dying. Some doctor somewhere had diagnosed him with COPD, and told him he didn’t have long to live, probably just weeks. He was OK with that. He didn’t have much to look forward to, other than hanging out at the bus stop every day, drinking his beer, smoking cigarettes, and waiting for people to talk to. He said his biggest regret was that he couldn’t chase women anymore, and wouldn’t be able to do anything if he caught one.

Chuck was cantankerous. He disapproved with much of what he observed, and didn’t suffer fools, politicians, social workers, or religious people gladly. He generally didn’t appreciate being told what to do, whether that came from well-meaning family or friends, or police. He also was very wary of letting anyone get close. As I got to know Chuck, I realized that he’d been hurt by people, and used his grumpy-old-man demeanor to protect himself. Trying to crack that shell by asking about family, about growing up, typically got a person yelled at. Mentioning God or anything to do with religion yielded a stream of profanity and anger that hinted that some of the hurt in his past had come from religion, or religious people.

He lived for a while at a homeless shelter, but eventually was evicted. After that, he lived on the streets for months. Chuck found a room to rent for a few months before he was evicted for trying to sneak his friend Joe, aka “Grandpa” in to live with him. Chuck was one of those homeless people that folks love to put on TV: He would tell you that he was happy living on the streets because he didn’t want to follow the rules. We’ve all seen them… the interviews that make it easier to ignore that guy on the corner, to even judge him… to believe that he deserved his condition for rebelling against society, rules and laws.

But it was a lie. Chuck wasn’t happy on the streets. He had simply given up hope of any other life. He was estranged from his family. He’d joined the Army when he was young, only to be medically discharged after about six months because of his poor eyesight. He’d worked for a time installing fences, but eventually couldn’t physically do the work.  He drank to ease the pain in his life–emotional pain, and then physical pain. People betrayed him; people let him down. Eventually, social workers got involved and tried to help, but too many times they weren’t able to deliver, or deliver quickly enough, and Chuck quit trusting them, quit believing that they were trying to help*.  Chuck didn’t want to live on the streets.  He just didn’t want to be hurt any more, and the streets were the easiest place to isolate himself.  Being cantankerous was the easiest way to keep people far enough away that they couldn’t hurt him.

Chuck spent this summer living at the bus stop.  Living outside in the summer in Tacoma isn’t too bad.  It doesn’t rain much, most days are sunny and beautiful.  But as the morning air started to get crisper, it became harder for a 65 year old man with COPD, a massive hernia, dementia, and dependent on a cane or walker to sleep on the sidewalk.  The rain was beginning again, making it difficult to stay dry.

One wet morning in early September, Chuck told me that he was going to ask his payee for money to buy a tent.  I told him he wasn’t going to survive the winter in a tent, and asked him if he’d be willing to go to a homeless encampment the city was operating.  To my surprise, he agreed!  For those that may not be familiar, Tacoma, Washington is in the midst of an overwhelming homelessness crisis, where the need greatly exceeds the available resources.  Fortunately, I’ve been able to make connections with several organizations doing the work, and quickly got Chuck set up with an intake meeting with my amazing friend Latisha, who leads one of the homeless outreach teams.

Latisha met Chuck and I at the bus stop to conduct the interview.  That’s when first I learned of Chuck’s military service.  Chuck was a veteran!  That’s just about the best news you can learn about an individual experiencing homelessness, because it unlocks a lot of resources that aren’t available to others.  It immediately qualified Chuck for a bed in the “veteran’s room” –a quiet(er) place within the cacophony of the men’s shelter.  It also qualified him for housing assistance and better access to medical care through the VA.  I’d been talking to Chuck several times a week for more than two years, and he’d never let me know that he was a veteran.  This changed everything!

Latisha and Chuck’s VA case managers did all the hard work, and I kept pestering them to make sure he didn’t get side-tracked by the wheels of bureaucracy.  I also kept pestering Chuck to make sure he made it to his appointments and followed up on tasks his case managers gave him.  Even with all of that support, it took from September 4, when he first agreed to seek assistance, until December 31st, to get Chuck his own apartment that he could afford.

Chuck got a new home on New Year’s Eve.  But it wasn’t the apartment that he was scheduled to move into overlooking the bus stop and park where he’d spent every day for the last 3 years that I’ve known him.

The day after Christmas, Chuck was taken by ambulance to the hospital.  Latisha called me yesterday to inform me that she had just found out Chuck was in ICU.  When I arrived at the hospital, Chuck’s older brother and his sister-in-law were in his room, having just found out themselves that he was hospitalized.  The hospital hadn’t been able to locate any emergency contact information for 5 days.  Chuck’s body was failing, and there was nothing doctors could do.

I spent the afternoon sitting by Chuck’s hospital bed with Chuck’s brother Dan, as we pieced together details of the last 3 years of Chuck’s life, along with tidbits of the previous 62 years.  I was surprised to discover that Dan lived less than 20 miles away, and that he did homeless outreach work in Olympia.  Dan was surprised to hear that Chuck had been talking with a pastor (me) almost daily for 3 years!  He shared with me that Chuck had severed almost all contact with Dan and his wife when Dan began following Jesus.  Dan has always been there, but for reasons that none of us can fully understand, Chuck couldn’t let him get close.

From almost the day I met Chuck, I knew he wasn’t going to be receptive to discussion of Jesus.  He never told me why, but he made it glaringly obvious that he had NO use for discussions of faith.  But in the past six months, he’d actually been agreeing with my comments about God watching out for him, or providing a home for him.  In the past couple of months, when he’d get angry because the VA process wasn’t happening as fast as he thought it should, he’d soften and acknowledge that people like Latisha loved him and were caring for him.  His demeanor shifted this fall– he was less and less cantankerous, and more and more… joyful?  Chuck didn’t want to be homeless so he could live by his own rules.  Chuck wanted what every person wants–to love, and to be loved.

Chuck moved into his new home at 8 pm on New Year’s Eve.  I missed him this morning. 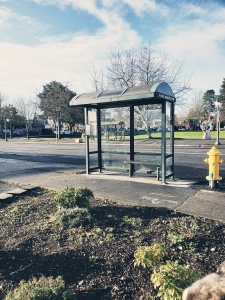 *This is not an indictment on social workers–most of them are doing way more than we pay or equip them to do, and serving way more people than they have the capacity to help. And people like Chuck are hard to help–they are easy to lose contact with, the instability in their lives causes them to frequently miss appointments, etc.

One thought on “Chuck got a home”